Catholic Bishop in northern Ethiopia calls for an end to ‘genocidal war and siege’ that has raged for nearly two years, largely unnoticed in the shadow of Ukraine.

After a ceasefire expired in August, and peace talks scheduled for October were postponed without a new date, the violent conflict in the Tigray region of Ethiopia, East Africa, has seen an alarming deterioration. Tens of thousands of people have been displaced in recent weeks, although estimates are hard to calculate due to the lack of access to the region and with telecommunications interrupted.

What was already extremely limited humanitarian access became “no access” as of late September, when the government advised aid agencies to avoid working in areas where it was taking ‘preventive measures.’ This cut off the only external lifeline for civilian populations to receive food, cash, and emergency relief supplies. The fifth consecutive year of drought, combined with conflict and skyrocketing prices of grain and fertilizers from areas affected by the Russian war against Ukraine, translates into people in Ethiopia dying not only from conflict but also hunger. The crisis now affects the entire Tigray region as well as large swathes of Afar and Amhara, regions of the country which previously had been less affected. The whole of East Africa is also engulfed in the worst drought in 40 years, according to the UN.

Fighting against the Ethiopian government is the Tigray People’s Liberation Front (TPLF), a paramilitary group and a political party banned by the current government. But the TPLF also commanded power in Ethiopia previously, for several decades until 2018. Ethiopia is assisted by the government of Eritrea, a neighboring country that claimed independence from Ethiopia in 1993, with several other countries providing military support without having ‘boots on the ground’.

A recent UN investigation by the Commission of Inquiry on Ethiopia, working under a mandate from the UN Human Rights Council, attributed a worryingly long list of war crimes by all parties to the conflict. These include the blocking of humanitarian aid, bombarding of civilian areas and targets, and indiscriminate use of anti-personnel mines, as well as the use of rape and sexual violence as a weapon of war against the civilian population. What’s more, accessing medical care is nearly impossible, so victims of violence go without treatment. There is also a lack of medicines of all types, including vaccines for children and treatments for rabies, diabetes, and other conditions requiring pharmaceuticals.

“On top of the already existing siege and suffering, the […] attacks with drones and warplanes, massive indiscriminate rain of artillery on civilians in crowded places, urban and semi-urban centers, marketplaces, health and education facilities, etc. are destroying innocent civilian lives of the population who have lost all means of coping.”

“On top of the already existing siege and suffering, the […] attacks with drones and warplanes, massive indiscriminate rain of artillery on civilians in crowded places, urban and semi-urban centers, marketplaces, health and education facilities, etc. are destroying innocent civilian lives of the population who have lost all means of coping,” reads a statement dated 4 October by Bishop Abune Tesfaselassie Medhin of Adigrat Eparchy in Tigray. He notes that a health center run by the Daughters of Charity Sisters has also been shelled. He also decries the further “heart-bleeding reality [that] over one and a half million school children have been deprived of their right to an education for three years.”

At the end of September, access to camps for internally displaced people in Tigray became nearly impossible, with the government taking ‘preventive measures.’

In his lastest plea to the international community and international actors, Bishop Tesfaselassie Medhin, says, “In this critical situation we believe that the local and international collective, civilized institutions and peace-loving elements have to exercise their moral duty, be a voice for the voiceless, and enforce international treaties to save more than 7 million lives from vanishing.”

The UN estimates some 6 million Ethiopians are internally displaced, but there are also more than 800,000 non-Ethiopian refugees in camps and settlements across the country, as well as additional numbers of Ethiopian returnees who had returned from other countries where they had previously been hosted as refugees. More than 2.9 million of those people are in Tigray, Afar and Amhara regions alone. Many Ethiopians have also fled, mostly to Sudan. Some 1.5 million displaced have not been reached with humanitarian assistance, due to the security situation across the whole country.

The bishop calls upon Catholic networks and partners for help, emphasizing, “This is the largest active war going on on our planet right now, devouring the largest number of productive human lives.” He calls for:

ICMC echoes the call urging all humanitarian partners to respond to this humanitarian emergency that risks further loss of life and insecurity for millions of women, men, and children, especially given the gross violations of human rights and international humanitarian law, in the form of bombing of civilians and civilian targets and blocking of emergency humanitarian assistance.

ICMC also calls on the UN and internationally mandated entities to prioritize international action in northern Ethiopia, to safeguard human life, dignity, and wellbeing of these vulnerable populations. 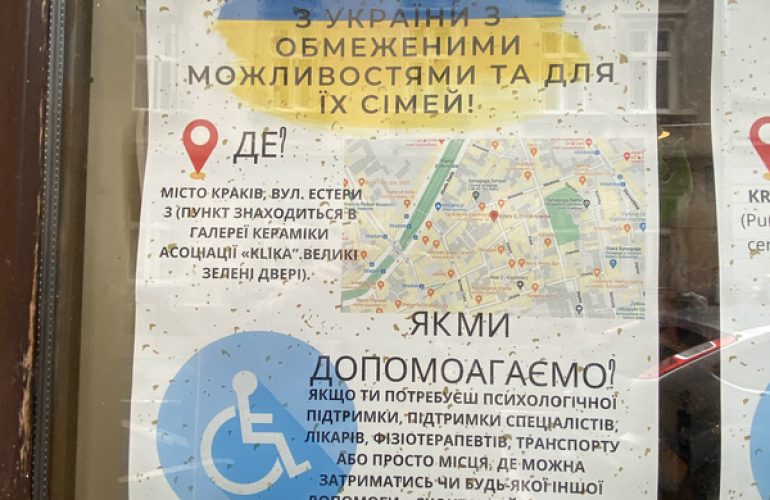 In Poland, a Catholic organization combines the energies of local people with disabilities and their friends to ensure essential relief…