With the support of the International Catholic Migration Commission (ICMC), international organizations, and their local partners, gender-based violence survivors in Jordan are empowered to learn how to become emotionally secure, financially independent, and to feel more in control of their lives.

Razan*, a Syrian woman living in Jordan, was long subjected to a barrage of violence from her husband and two eldest sons. “Due to the continuous pounding, I had lost the feeling in my fingers,” Razan explains.

She escaped from her village in Daraa, Syria, in early 2013; due to massive air strikes over her house, her only option was to flee to a nearby village. Razan’s husband remained hopeful that the conflict would end shortly and opted to stay behind to protect his business. He asked Razan to flee with the children, saying he would join them if things did not improve.

Razan and her six children stayed with her relatives in the village for some time. She had to borrow money from them and transfer it to her husband so that he could continue his business. Her relatives handed her paperwork for the loan, which she signed without understanding the consequences.

Later that same year, as fighting worsened in the area, Razan and her family fled once again, this time to Jordan, where her husband joined them. Razan and her family settled in Al-Karak, in southern Jordan. Only a few refugee families chose to settle in this city. “From the time I came, the city’s inhabitants welcomed and helped me, and my family and I felt completely at ease,” said Razan.

Although she found kind neighbors, Razan lacked the knowledge of the services available to her in her new country. In 2014, she was pregnant and went into labor on a stormy winter day. Because of the snow, the city’s roads were nearly impassible. She had no idea that she could have contacted the Civil Defense Directorate, a branch of the Jordanian Ministry of Interior, which  provides emergency services, to take her to the hospital. Her neighbor offered to drive her, her husband, and her mother-in-law. The journey took four hours. During the trip, Razan was in great pain, so her mother-in-law tried to help her deliver the baby. When they arrived at the hospital, the doctors told them that the baby had died.

Heartbroken, Razan hugged her baby tight to say goodbye… and the baby began to cry. “It was a truly heavenly miracle,” Razan recalls, amazed and joyful. “I still can’t believe that my baby has been given a new life, thanks to God!”

Soon after the birth, Razan’s relatives began to threaten her, saying that if she didn’t return the borrowed money within three months, they would do whatever was necessary to be reimbursed. Penniless, Razan fled to Irbid in Jordan’s Northern Province to protect her family until she could pay off the debt.

She then resorted to borrowing money from other people to repay her relatives and was obliged to warn her husband of the threats she was receiving. Her husband told her that the relatives had nothing against him; that what happened to her was not his problem. In her hometown, violence against women at home is considered a family problem with which people should not be concerned. During the COVID-19 lockdown, her husband began to beat her severely, and allowed his eldest sons to hit her as well.

Refugee and displaced women were at high risk of gender-based violence even before COVID-19, and since the pandemic, violence against women and girls, particularly domestic violence, has intensified. Reported incidents of gender-based violence increased by 51% in the first half of 2021, as compared to the same period of the previous year. In Jordan, physical assault accounted for 24% of recorded instances of sexual and gender-based violence between January and June of 2021, while psychological and emotional abuse account for 54%.

Razan already had been subjected to the most horrible forms of violence and at first refused to face it; she tried to hide the scars so that the protection team at the UN Refugee Agency (UNHCR) would not notice them. When the staff eventually asked about them, Razan began to cry, then shared her tragic story; her tears barely flowed because of the injuries in her eyes. As a result of her husband’s and sons’ brutality, one of Razan’s kidneys was damaged. Finally, her husband and eldest boys were barred from the house and forced to sign a pledge to the governor of Mafraq stating that they would not assault her. In addition, the UNHCR protection team initiated divorce proceedings at her request.

The divorce ruling was issued in April 2021 and was forwarded to the Irbid court for approval. However, the judge determined that the papers were incomplete. Since then, as her divorce was not finalized and she is still registered with her husband, Razan has been unable to receive regular assistance. Her husband receives assistance coupons and delivers to her only enough to cover the bare household necessities. Her rent is thus piling up, as what she receives is not enough to cover her own and her younger children’s needs.

Lockdowns and other mobility restrictions have made it more difficult for survivors to report violence and receive assistance, and rates of violence against women have soared. During the lockdown, the International Catholic Migration Commission (ICMC) was able to quickly adapt its program and switched to remote services and activities to reach out to the most vulnerable people. ICMC’s protection team contacted Razan and offered her to take part in its Positive Parenting Course, which is designed to enable caregivers to create a brighter future for themselves and the children they are parenting. The course also aims to strengthen families, empower caregivers, boost their self-confidence, and build their self-esteem.

Having witnessed the abuse of their mother, Razan’s daughters were traumatized. They were also enrolled in ICMC’s Life Skills Course, which caters to the needs of vulnerable girls and women aged 14 to 21. Participants in this course learn about adolescent health, self-care, dealing with emotions, their human rights, the harmful effects of child marriage and of gender-based violence.

Having come a long way, Razan wants to share her story in order to advocate for women’s rights and for services that prevent gender-based violence. On International Women’s Day, ICMC works to amplify women’s voices and raises attention to their rights and the unique challenges they face around the world. ICMC Jordan is commemorating the day with a variety of events and activities, and honors the survivors of gender-based violence.

ICMC Jordan’s protection activities are financed by the U.S. Department of State’s Bureau of Population, Refugees and Migration.They aim to strengthen the resilience of vulnerable communities in Jordan and to enhance their protection.

*Her name has been changed to protect her identity. 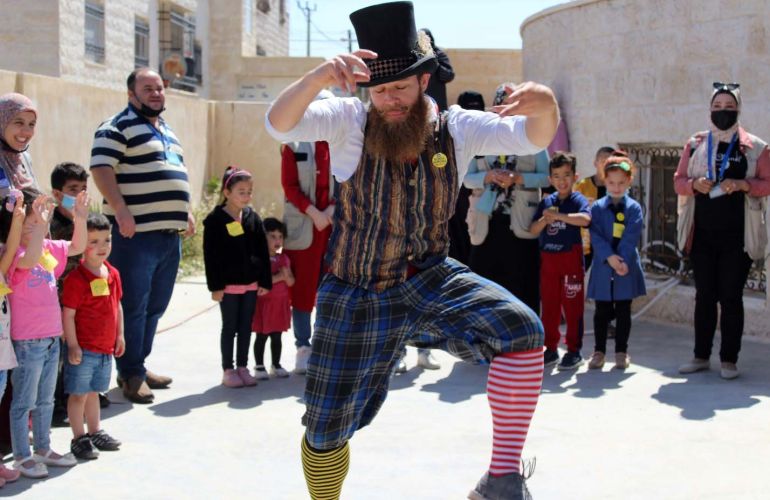 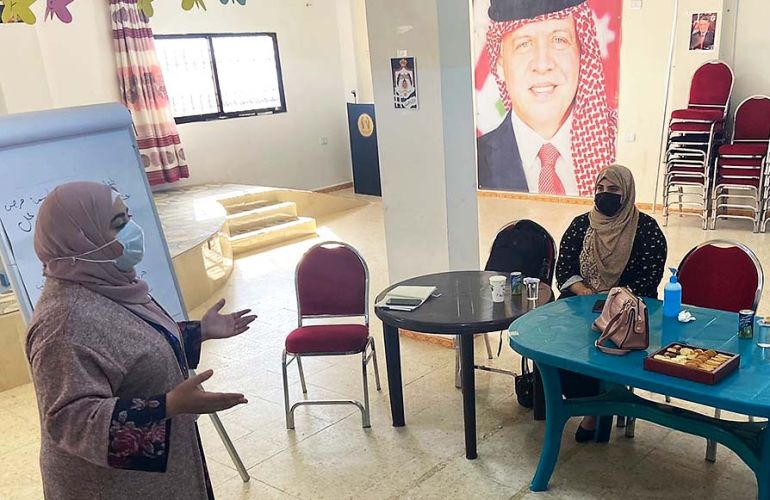